Fall into The Gap

Think of a very close friend of yours who you’ve seen every day for twenty years.

Or so you think.

One day you meet for a drink and in walks someone that resembles your friend and sounds like your friend, but on this day, they look very different. On this day, they’ve decided to dress like DJ Lance Rock. “Friend?” you say. “Is…that you?”

Ok. Something’s wrong. This isn’t my friend. Who the heck is this?

Well that’s exactly how thousands of Gap fans felt when The Gap replaced the blue box logo they’ve had for decades with a new one overnight. The new logo, which they placed on their Facebook page, was greeted by a swift and immediate backlash causing Gap marketing folks to revert back to the old one, only days later.

I’ve seen a bunch of comments about how bad the actual design was and how poor the font choice was and how odd the little blue box above the “p” was.

To me the biggest blunder is how poorly they failed to engage with their Facebook fans, before changing the logo. Now I’m not saying they should have crowd sourced the design of the logo, but they could have let their fans know a new logo was coming or they could have explained to their fans why they redesigned the logo in the first place. They could have done a bunch of things that, at the very least, would have started a conversation.

While marketers are doing everything possible not to be seen as just manufacturers of consumables to be pushed on the masses, and while most of them have Facebook and Twitter pages, it’s ironic that the Gap would miss a huge opportunity to have dialog with its strongest brand evangelists.

Gone are the days when all a brand had to do to sell more product was refresh its logo. Just shows the “gap” (sorry, couldn’t resist) that still exists between most brands and those they depend on to keep them in business.

When I was 9 I used to play this game with my uncle where he’d draw a squiggle on a piece of paper, then hand me the pen and ask me to finish the drawing.

Wouldn’t it be great if we could approach more projects with that in mind?

It’s a tough challenge these days. In our attempt to give consumers more ways to connect with brands, a single print ad, for example, can end up with multiple logos, multiple urls, tag lines, QR codes…

Well, here’s an exercise that helps us get back to that idea of “whatever you want it to be.” Pretty amazing how many different things can be seen from one squiggle.

Rut Busters: What do you see?

In every agency it’s the same story. Buildings filled with problem solvers doing their best to meet shrinking timelines, while providing their clients with their freshest thinking.

As you can guess, shrunken timelines and fresh thinking don’t get along great. Let’s just say they’re not friends. They don’t even like being in the same neighborhood. And rarely will anything good come about when they’re forced in the same room, let alone brief.

So being the super smart and evolved communicators we are, we naturally kick into high gear. Faced with no time, our brains do a quick search of all the solutions that have worked in the past and finds the one that best matches the problem in front of us. (Probably has to do with some left over fight or flight issues.)

Anyway, it’s awesome for meeting a timeline. But not awesome for creating unique and effective work that addresses a unique communication challenge. It leads to patterns and ruts where you end up with the same solutions to completely different problems.

At NYCA we don’t like ruts. They’re not good for agencies or clients, so we’re doing an internal series of rut busters in the way of visual teasers, thought provoking questions and brain contorting challenges. Just different ways to keep our minds open and seeing problems from unexpected directions so we can continue to provide our clients with unique and effective grow! work.

And it’s not just for the creative department. The Rut Busters are for every NYCAer whether you’re the President, in accounting or part of the cleaning crew.

Who knows, it just might reveal which senior account person will be our next jr. art director or writer.

Here’s the first rut buster and what NYCAers’ saw.

What do you see? 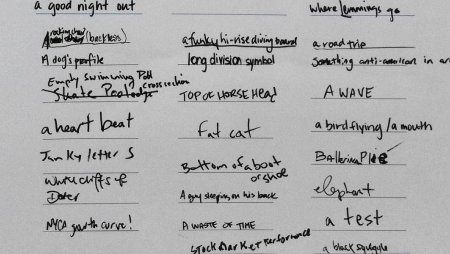