I debated whether to write this blog post or not, as its very existence will yield another set of impressions for this advertising.

DDB and WWF Brazil teamed up to create this execution and both companies are quite remorseful about this. 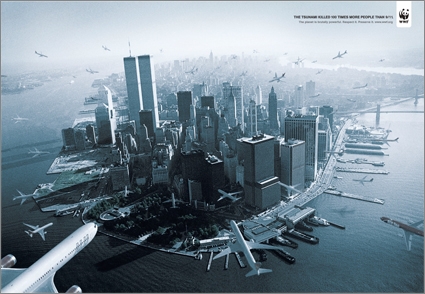 And yet, someone at DDB submitted this to the One Show, and it won an award there. The One Show is also quite remorseful about this.

As businesspeople, we all have an obligation to move society forward in a positive way. In advertising, we have even a greater obligation, as advertising has the ability to influence people, their attitudes, and the culture at large more than most other business sectors.

Now that society is expressing disgust, the entities involved are expressing remorse. But why didn’t their humility safety valves kick in earlier?

This advertising pulls a cheap trick – it says “look at me” and garners attention in “gapers block” style. But is it responsible to WWF’s brand? I think all those planes might have easily been pointing at the WWF logo.

And is it responsible to society? This ad defaces the reality of a moment of significant cultural change. Some things are not fair game for advertising borrowed interest.